On the 30th Anniversary of World AIDS Day: PTSD 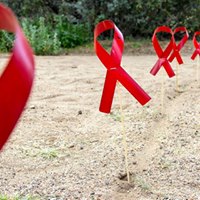 It. Started. Out. Really. Slow. Or so it seemed, and we all hid behind our denial. Straight people could say, “Well, that’s just a gay thing.” Or the gay man in New Orleans could shrug, “That’s just a New York problem, right?” Or the young black man in New York who said, “That only affects the white boys.” And we young, healthy white boys questioned “How could cancer be contagious?” Or better: “It’s only affecting the promiscuous. That’s not us.”

Soon enough, it would affect all the deniers, and everyone around the world. But we were the canary in the mine. To be plucked and roasted.

But the real joke was on us. Nobody cared.

The man I loved lay in a hospital bed. I picked up the lunch tray left outside the door and entered. (Cliché, right?) Two people in spacesuits pushed past me with a cart, bright “Biohazard” sign. I could see his face on the pillow. He was not one to show or share emotion. But the expression on his face I had seen once before: the night he told me about being in Da Nang during the Tet offensive. Terror.

I took my shoes off, and climbed into the narrow bed to hold him. The spacesuits suddenly reentered, and I could read the horror on their faces. I barked, “Get out!”

He died. In 1988, along with 21,000 others. That same year, the World Health Organization declared the first World AIDS Day, hoping to draw attention to the growing epidemic. It needed it.

By this time, any gay man with a reasonable social circle was already a member of the Memorial of the Week Club. You were lucky if there was just one. There were your friends, and ex-boyfriends, and that guy you knew from the boarder babies at Roosevelt Hospital. Then there were your boyfriend’s friends and ex-boyfriends, and the guy he knew from ACT-UP. And then there were your work colleagues, your neighbors, that bartender everybody loved. Your lawyer. Your accountant. Your barber. And you had to go, you had to honor their existence, had to acknowledge what happened—because you knew otherwise it would be covered up, swept up under the straight carpet, shanghai’ed by family members who really didn’t want you there, who’d look at you askance, meaning to say, “It’s your fault.”

But nobody cared. By 1990, 120,000 were dead. That was also the tenth year of the Reagan-Bush administration, which had no use for us. Cutting taxes was far more important than investing in research or care. It was not shocking to hear a prominent conservative suggesting that we queers have our butts tattooed as a warning signal. Or that we all be rounded up into concentration camps. I found myself reading more Holocaust literature.

The message was clear: Our lives didn’t matter.

And the Christians, yes, the Christians, gloated that it was our own fault. They began to include the emaciated face of AIDS as a grand finale in their haunted houses of sin. Irony: we were comforting the sick, feeding the malnourished, taking in the homeless, while the best most could do was cower behind Leviticus.

But we fought back hard, no sissies we. It soon became clear that the strong, silent type wasn’t much of a man at all, when Silence = Death.

You tell friends it’ll get better. And then they die, too.

There was no help. There was no hope. There was no compassion. Most of us had played some role as caretaker, or caretaker to the caretaker, cooked meals and cleaned their homes, or been buddies to PWAs. We started support organizations, staffed them, raised money, answered hotlines, or shouted at demonstrations. We had to do these things for each other. There was no one else.

I said to my therapist, “I’m worried that I’m not grieving.” He looked at me, paused, then answered, “You have too much to do. Someday, when you have the time, you’ll grieve.”

It wasn’t until 1990 that Congress was finally shamed into allocating any significant money into AIDS research—and even then, it had to be done in the name of a 13-year-old hemophiliac. Bless you, Ryan White.

Then 1995: with 320,000 dead, the first drugs appear. In a year or two, more therapies. Friends who had been at death’s door began to look healthy, to resume their work and their lives. Was it over? No, hardly. But now there was time to breathe.

I moved to another city, started a new career. I met a man. He had seen what I had seen, and could still laugh. He was kind. I fell in love again.

We bought a house. We adopted critters. We exchanged rings. It all felt so normal. But then, after a few years, he said to me, “There’s something I have to tell you…”

I cried. All night. More than 20 years into this accursed plague, it would still not leave me alone. Granted, the pharmaceutical cocktail allowed for more hope than some crazy smoothie of soy lecithin and sweetgrass, but the drugs have their side effects, and they’re expensive as hell. And who knows their effect in the long term?

The damage from an old, opportunistic infection could morph into something just as deadly, a decade later, even two or three.

Medical professionals are better trained and less fearful—well, many of them. Mercifully, there are still AIDS support organizations, that get the whole picture. Like Northland Cares.

You know, without the panic of ignorance or the fog of exhaustion, it’s possible to see the complexity of AIDS that I missed before. There is still stigma, and blame, and fear. There is shame, depression, and overwhelming issues of self-esteem and self-destructive behavior. I got to live with it again, just more slowly.

And he died, too.

I live with AIDS every day: not because I have the virus—I don’t; just dumb luck– but because I carry these battle scars, these nightmares of wasting illness, of lives cut short, of hopes dashed. Of nobody caring. It is not inappropriate to call it Post Traumatic Stress Disorder. PTSD.

We are strong. We have survived. We live among you, and we function in the world—or at least we think we do.

But I am doubly lucky. Here, now, in a small town in the Arizona mountains, I have connected with other men who have had similar experience, and we talk about it regularly. We have learned to trust each other. We do our best to be emotionally honest. (Well, we are men, after all.)

And it is amazing how, as we work through the pain of memory, we see the ways the terror holds us back: to not pursue a business idea, or to finish a book. To be wary of buying a house or signing a long-term lease.

Now, I understand my anxiety attack in the simple act of buying a washer/dryer—so big, so permanent, not something I can pick up and drive away with. Because all stuff just ends up in a big estate sale, where strangers pick it over, then walk away.

No. We have witnessed great futility and great inhumanity. But we are learning to be hopeful. And I urge anyone who understands what I’m saying to reach out, find others, and learn hope, too.

Now, I’m an old man, and I have told you my old man stories. I want everyone to know what happened, so that it can never happen again. We cannot forget.

Now, I’m mystified by pettiness and unkindness. Why bother? Now, I’m shocked by how quickly we fall back into patterns of “us” and “them.” Now, I’m alarmed by how easily that feeds denial. Who is the next canary in the mine?

If AIDS has given me one gift, it has been to learn compassion. And compassion is the only way we can prevent it—or something worse–from happening again.

Not to us. Not to them. Not to anyone.

And maybe, just maybe, I can hope that, when my time comes, whenever and for whatever reason (maybe you feel this way too?) someone will take off their shoes and hold me.

« Eulogy for an Oil Painter